In Bangladesh, the mobile phone companies emphasized mainly on voice service upto the end of 2005. Since then, the operators are introducing newer and modern technology to meet the data communication requirement of the clients. Other countries adopted those features long ago, specially the GPRS. GrameenPhone is the pioneer in introducing this type of data service to the people of Bangladesh. When GrameenPhone offered the service as a trial basis, Aktel announced the same sort of service… However, GP started staying a step ahead by offering EDGE where as Aktel started with GPRS. More over, after the trial period (to some selected users) GP’s service was available to both prepaid and postpaid customers. Aktel offered the service to both type of users recently prior to what the service was only available to the post paid users. Banglalink on the other hand offered GPRS to its postpaid Enterprise users from the beginning of 2007, depriving the prepaid and normal postpaid users. TeleTalk has offered reasonable packages for both prepaid and postpaid users. Infact teletalk is the only operator to offer unlimited usage package to the prepaid users also. Warid started its operation with the GPRS facilty, but yet to offer any unlimited usage package. Citycell, country’s only CDMA operator, has however started its data service after adopting CDMA 2000 1xRTT technology country wide. The data service technology by Citycell is known as EVDO (Evolution-Data Optimized). The service name is “My Citycell Zoom” and is only availble for the post paid users again depriving the prepaid users. Moreover, the package has flavor of both the time validation and data limit. This is not as cheap as the unlimited offers by the other operators nor as expensive as the Taka/MB offers. 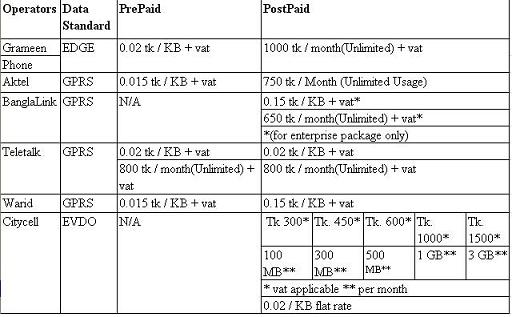 General Packet Radio Services (GPRS) simply is an extension of the GSM standard to provide packet data services. It was introduced in late 2000. It can provide data rates from 56 to 114 Kbps and continuous connection to the Internet for mobile phone and computer users.

Enhanced Data rates for Global Evolution (EDGE) is a radio based high-speed mobile data standard. It allows data transmission speeds upto 384 kbps to be achieved when all eight timeslots are used. In fact, EDGE was formerly called GSM384. This means a maximum bit rate of 48 kbps per timeslot. Even higher speeds may be available in good radio conditions.

EVDO or Evolution Data Only/Evolution Data Optimized (often abbreviated as EVDO, EV-DO, EvDO, 1xEV-DO or 1xEvDO) provides fast wireless broadband (3G) internet service. EVDO is based on the 1xRTT standard, which is available in almost all cell phone coverage areas and provides Internet speeds of about 2-3 times that of dial-up (about 60K-100K).

A comparison between different Data Standards: 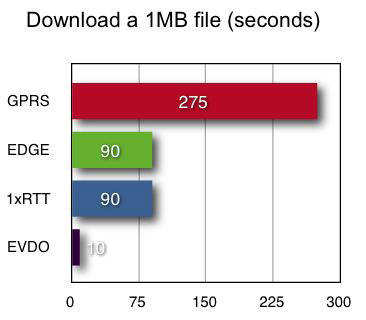 An advanced level article on this topic is available in the following link:

I hope you have idea how Internet sharing works in WINDOWS… You have to have two different Network Interface Card (LAN card), one to get connected to the internet and the second one to share the internet to other network. In this way a single pc can connect to X numbers of networks with X numbers of NIC. In this way a pc can act as a bridge between two different networks. This seems so complex a process and also there are many more limitations. Moreover the routing between two different network is simply not possible in windows. But in Linux things are way different and way ahead. Slowly but surely i am getting the facts why people prefer LINUX. Some of you might laugh at me but I am really amazed to know that multiple IP addresses can be assigned in a single NIC. Yes I am talking about the range-x thing. I can provide a range of IP assigned to a single NIC. eg. starting from IPs 192.168.1.1 to 192.168.1.20, doesn’t matter if my static IP was from another network( eg. 192.168.0.1). If my static IP and rangex IPs are from different networks, then by just changing the gateways of static eth0 card to the IP of any of the rangex IP and also changing the gateways of the rangex IP to the main eth0 IP address, I can configure a simple router (routing between 192.168.1.0 and 192.168.0.0 networks). VLAN can also be implemented using this method. This is probably how the web hosting companies provide a range of dedicated IP addresses to the Client. Well I couldn’t write more details and the codes or configurations required for this as it would take the whole night for me to explain the whole procedure. But this is very interesting indeed. You can get some details from the following link: