Day1: We started from the Saudia S. Alam Bus counter at Fakirapool. After a good Battle, our manager mushfiq managed ticket for the bus of 11 am. The bus was a real masterpiece and it was of the brand Mercedes Benz. 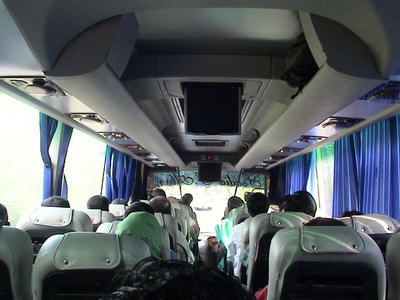 It was a total comfort inside it as we booked the most luxurious 6 seats. 6 seats because Mizan joined us the next day. 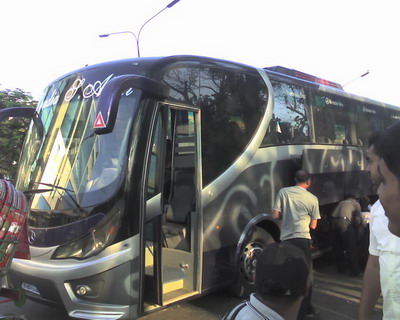 Anyway, it was a pleasant journey and we reached at CTG by 4. Ashik’s immediate elder brother Asif bhai booked the tickets for us for our Bandarban trip from CTG. Our bus started at 6 and we reached at around 9 pm. We knew that we’ll be out of mobile network while we’ll be there at Bandarban, therefore we contacted our home and conveyed our msgs. Mobile phone signal went out when we were about 5 km away from the Bandarban town. Anyway, we then went directly to a hotel and took our supper. We were a bit confused regarding where to stay. Ashik contacted with his friend Capt. Shahed who already booked a place for us to stay. 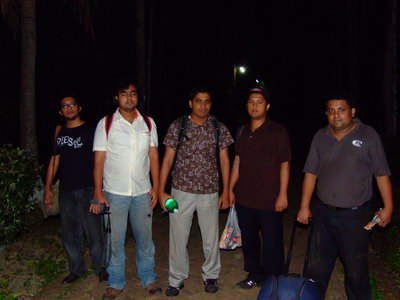 It was the Horticulture centre, just beside the Cantonment and the police line and it was around a 20 minutes ride by rickshaw. The place was very comfortable and silent as it was a bit out of the town. The arrangements were great although not luxurious. That night we went to bed at around 3 am as we kept talking about various private (!!) matters and ofcourse each of us got our turn to be pochafied… 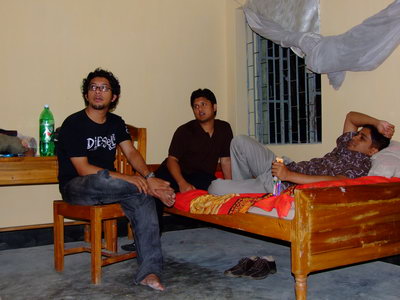 We tried to plan for the next day but failed to do so. Anyway, we knew that there were restrictions on different parts of Bandarban as the cheif advisor was there to visit Bandarban. So we were a bit anxious on what would happen the next day.

We woke up at 8 am and it took us around 1 and a half hour to be prepared to go out. Then we went out of the horticulture centre for a lazy walk towards the Shorno Mondir (Golden Temple). 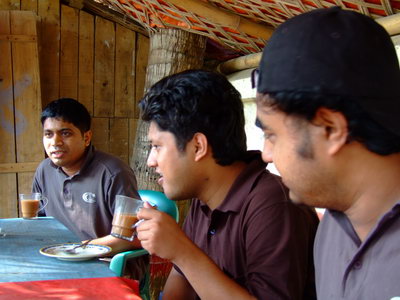 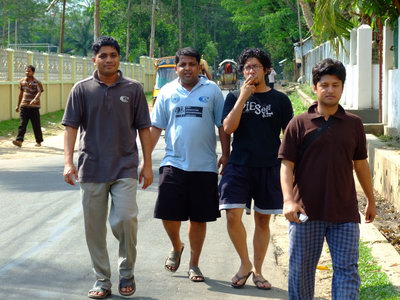 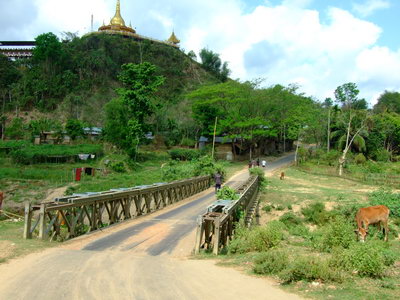 Zea convinced Ashik (As Ashik was not in a mood to walk as always) that it will take no more than 15 mins to reach the place, and believe it or not we reached after an hours walk and we had to climb very high to get some gorgeous views of the temple as well as other surroundings. 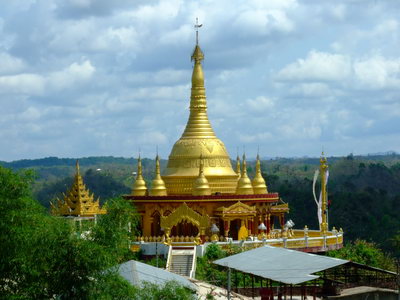 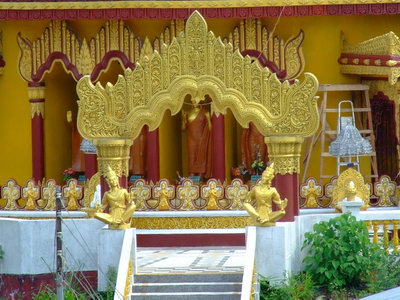 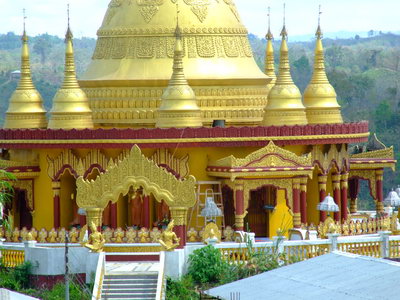 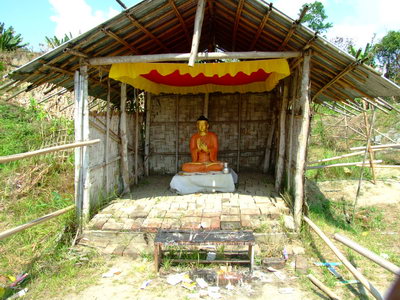 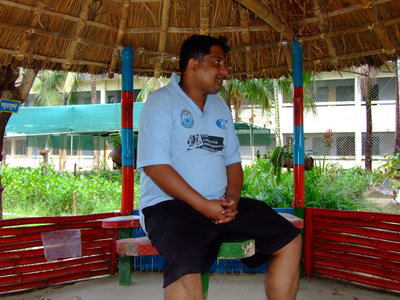 Then we got back to the horticulture and found that Mizan arrived there and waiting for us. 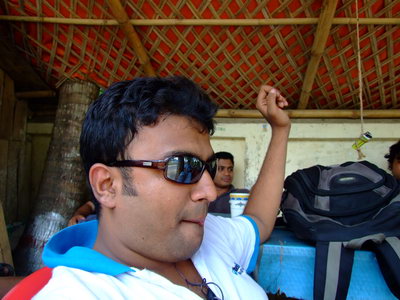 He didn’t miss much except for the funny talk in the previous night and the enchanting view of the temple. But he didn’t miss this fall also… ha ha ha… 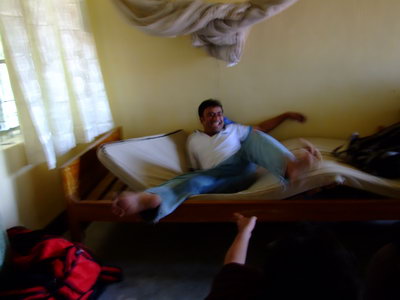 Anyway, after taking a shower we started for the town and at around 1:30 pm we finally took our Brunch (Breakfast + Lunch). Although we were out of mobile network there were telephone shop every here and there at Bandarban and even beside the gate of Horticulture centre. They used mobile phones to communicate but with the help of high gain antenna. Anyway, after having the BRUNCH we were about to start for the shoilopropat and Tiger hill. But unfortunately we found there were no vehicles to take us to those places. 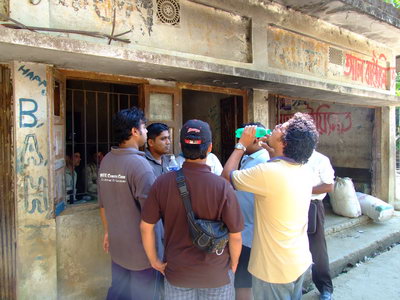 Atlast all we could manage was a CHANDER GARI (Very old toyota Zeep) and with a fare of taka 1000 (too high for a vehicle like chander gari). The scarcity was because of Cheif advisor’s trip to Bandarban and all the public transports were requisitioned. Anyway we started for the shoilo propat through chander gari and through a very hilly road. We reached shoilo propat quite comfortably and enjoyed every moment there. The place was a rocky place and a fall was there. The water was crystal clear and the local people even used the water for drinking as well as bathing. 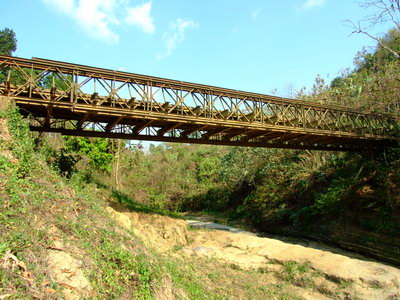 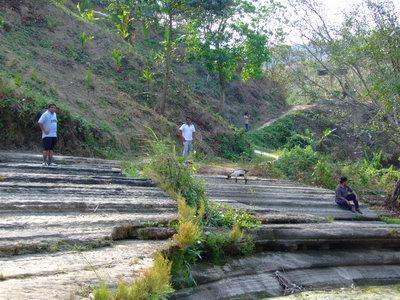 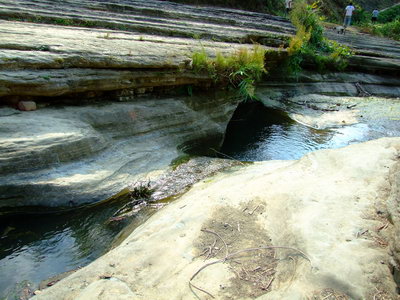 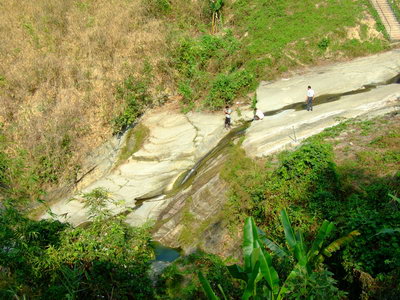 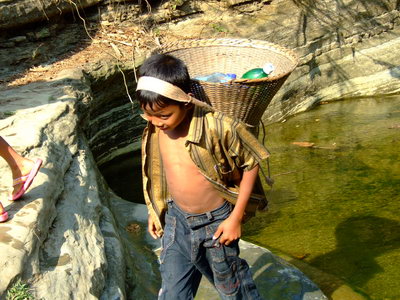 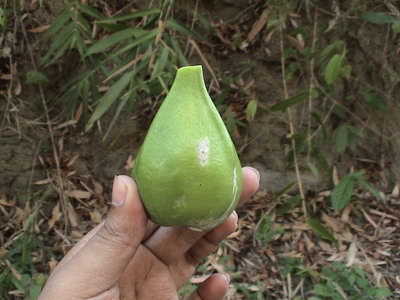 After spending some unforgettable moments we started for the Tiger hill. We stopped at the resort of the Guide tours to have a look and to our amuse we found some of our NSU buddies there. 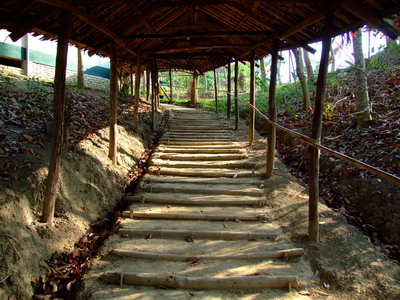 Then we started again for Tiger Hill. Just a kilometer after we started our vehicle went out of control as it was climbing down the hilly road. The driver lost the control completely and the zeep hit the hill at the left side where it could merely survive and stop. Had it gone towards the left when lost control, we were thousands of feet down and I doubt if anybody could trace our body. Thanks to Almighty Allah we survived that time. After getting down from the vehicle and looking at the fall that we missed we were really shocked to find that we were so close to the death that day. 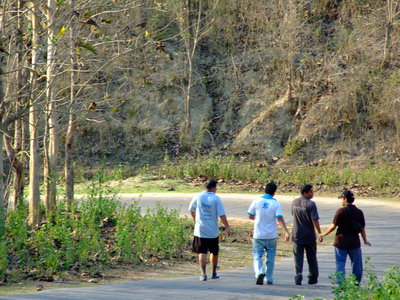 Anyway after 4/5 km we changed our vehicle and this time it was another Chander Gari in a slightly better condition. The road towards Tiger hill was even more dangerous and crowded. However, we finally reached Tiger Hill and we found that all our sufferings were worthy enough after reaching the place.

It was the highest point around Bandarban town. Bandarban was more than a thousand and five hundred feet down from tiger hill. There was a nice watch tower right on top of Tiger Hill. 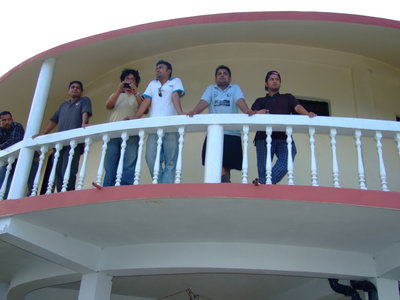 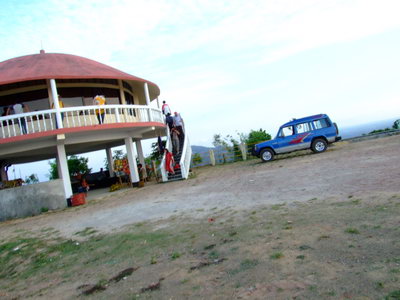 It reminded me the TIGER HILL in Darjeeling. That Tiger hill was also the highest point around Darjeeling and there were watch tower too. Anyway, from the tower we could even see the Bay of Bengal although it was more than 50 km away from where we were standing. After around an hour we started back for the Bandarban town.